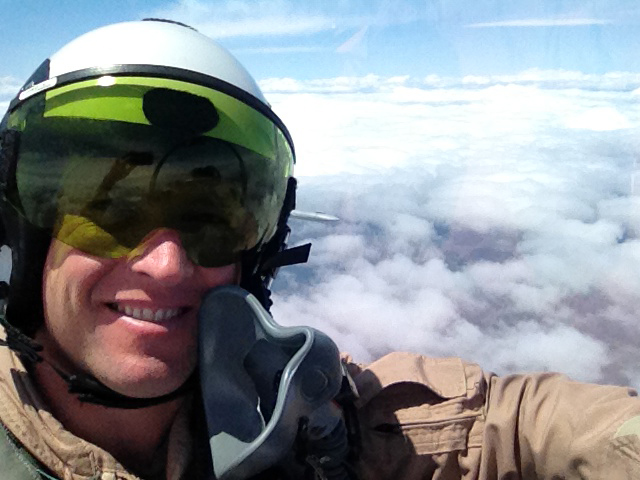 All fighter pilots who are worth anything have one of these…a selfie doing the best job you could ever have. This particular picture was taken a few years ago over the skies of Southern California. I was nearing the end of 21 years of flying high-performing fighter aircraft and as you can see from my smile, it was a thrill every minute.

In the span of those 21 years, I amassed over 2800 hours of flight time in the McDonnell Douglas F/A-18 Hornet and Fairchild Republic A/OA-10 Warthog. I graduated from the United States Navy Strike Fighter Tactics Instructor program, also known as Top Gun, and was selected as the Instructor Pilot of the Year.

I deployed four times, earned my Masters of Strategic Studies as a Distinguished Graduate from the U.S. Army War College, and served as a Reserve Chief of Staff. However, this picture and everything I accomplished would not have been possible if not for the hard work and dedication of the Marines who supported me back on the ground.

What makes those Marines work so hard? Why do they put in the long hours working 10, 14, sometimes 18 hour days? Tradition, ethos, team-before-self are all good reasons. However, the number one reason is Leadership.

The U.S. Marine Corps takes great pride in its ability to create leaders almost out of thin air. In my opinion, it’s why they have always been able to do more with less. From the highest-ranking General to the lowest-ranking private, Inspired, Compassionate, Mission-Driven Leadership is the bedrock of the U.S. Marine Corps.

In 2004, I left Active Duty, joined the U.S. Marine Corps Reserve, and began teaching companies and organizations across the world how to apply leadership principles to their everyday business. I have worked with Fortune 100 and 500 companies, from their executive leadership teams down to their frontline employees, improving their execution.

I have worked as the Account Manager for Southern California for a safety and security company and as a Director of Business Development for a counter-unmanned aerial system (UAS) company. I was also as the Vice President of Operations for a neck exercise device start-up as well as an Organizational Development Executive guiding executive leadership teams for a management consulting firm. How I Can Help

Through my keynotes, consulting services, and personal coaching we Build Inspired, Compassionate, Mission-Driven Leaders. The ultimate goal and true function of leadership is to produce more leaders, not more followers. I want to help you solve your leadership challenges and give your teams the tools necessary to be great leaders. That is the focus of Strategic Leadership Consultants, LLC.

Allow me to work with your teams and pass on the knowledge I have gained over 30 years. Let me lead your teams toward success!